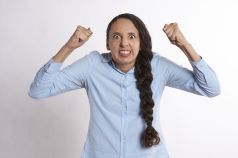 Are you sitting or standing?

From a recent post on the Jack’s Winning Words blog – “It’s easy to sit up and take notice.  What is difficult is getting up and taking action.”  (Honore de Balzac)

Last week Detroit hosted a bunch of women who have decided to stand up and take action. This Women’s Convention in Detroit grew out of the Women’s March on

Washington, which was itself a protest against what many women felt was a more than just a macho attitude in Washington about women or just boys and men behaving badly. The movement grew out of the decision of one woman to stand up and take action, rather than just sit watching the TV and lamenting the news in Washington D.C. as it unfolded.

The fact is that we are all confronted on a daily basis with many things that we need to evaluate our reactions to and take the appropriate actions. We see bullying and walk

hurriedly on by; we see acts driven by racism or homophobia and look away in hopes that now one saw us; we pass by the beggar and avoid eye contact; we make it a point to avoid the person who just ended a relationship because we really don’t want to hear about it; we don’t go to visit the sick person in the hospital because we just don’t have the time to waste; we don’t correct the person making inappropriate remarks or touching us inappropriately because we just want to “get along”.

The fact is that we all sit by and take notice of many things that we should be standing up and doing something about. I do. You do. We all do. Does that make it right? No! The

excuses are all the same. “I don’t want to get involved”.” “It’s not my problem.” “I don’t have time for that.” I would posit that as a fellow human being you are already involved, it is your problem as soon as you recognize it and there is nothing more important that you could spend your time on that helping a fellow human being. In Mark 12:31 Jesus told us that the second Great Commandment is, “Love your neighbor and you love yourself.” You cannot love your neighbor if you ignore him and his problems.

Now, obviously, you cannot spend all of your time seeking out and solving the problems of those around you. That is not what is meant by “getting up and taking action”; however, you can decide to stop avoiding or ignoring what is going on around you. Just like the women who have use the hashtag #MeToo, you can decide to start speaking up about the injustices or prejudices that you experience or see in your day to day life. You may get thrown off a plane, like the women on the News recently who complained about being racially targeted for reassignment of a seat on the plane. You may be passed over

for some promotion or reward because you won’t “play ball” with your boss; however, in the long run right will win out.  Being in the right and deciding to stay on that side and take action, not only means never having to say you’re sorry; in many cases, (especially those involving high profile lawyers) being right and standing up and doing something about it is rewarding in more ways than just emotionally.

So, take stock at the end of the day and look back on the things that were wrong that you took notice of. Did you stand up or sit by passively and hope that they would quickly pass? How does that make you feel? What can you do differently tomorrow? Don’t take the easy way out. Don’t just sit up; stand up for what you know is right. Stand up and have a great week.

faith, Inspiration | Tagged: #inspiration, #MeToo, do what is right, faith, stand up |