Where do you draw your line?

scoff•law/ˈskôfˌlô/ noun: A person who flouts the law, esp. by failing to comply with a law that is difficult to enforce effectively.

crook noun : a person who engages in fraudulent or criminal practices

As a society we seem to almost be at comfort with scofflaws; while, of course, we dislike crooks. In either case we have people who are breaking the law; it’s just that scofflaws are probably breaking laws that we all break at times. Many of the infractions that scofflaws commit have to do with traffic laws – stop signs that seem just to be there to slow us down and annoy us, so let’s roll through without stopping, or those really annoying no turns on red signs (and laws) when there is no cross-traffic in sight. Those are laws that it is hard for local police to enforce; but, where do you draw the line and where does being a scofflaw cross over into being a crook?

If you think about it the word scofflaw really defines the person well – someone who scoffs at the law; someone who believes themselves to be above the law. One could argue that the ex-mayor of Detroit started as a scofflaw. It certainly appears from the various trials and testimony involved that he came to think of himself as above the law. It’s interesting how many people who achieve positions of power and authority allow that to happen in their lives.

There is another trait that seems to go hand-in-hand with scofflaw behavior – the loss of a moral compass (loss of character, if you will). Any 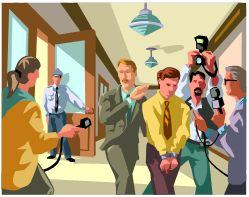 reading about the events and people involved in things like the Enron meltdown or the recent real estate robo-signing scandal brings the term scofflaw (at a minimum) to mind; if not a complete breakdown of any morals that may have been involved and eventually criminal behavior as the subsequent trials proved.

I’ve written many times about the fact that I live on a corner that has four-way stop signs and a flashing red light above the intersection. Most people at least slow down quite a bit there and many even stop (but may do not, especially in the morning when kids are being dropped off at the Middle School). The next corner west of mine has four-way stop signs and no flashing light above and at least 2-3 times a week I witness people not even slowing down there. I suppose those are really scofflaws, they’re idiots; but that’s a theme for another post.

The point is that if you choose to roll through that corner or make the turn anyway at the light that has the sign stating “no turns on red”, what’s next for you? How do you stop yourself on the slippery slope leading towards crook (or do you)? Do you at least feel bad about it afterwards? That would be a start to getting your moral compass back to the forefront. Being a scofflaw is a bad thing, but the worst part is probably the damage it does to your character, whether you can see it or not. You are not just scoffing at the laws, but also thumbing your nose at all of the people who do comply with the laws that, after all, were put on the books by the representatives of the people. Shame on you!

This entry was posted on Saturday, October 13th, 2012 at 12:49 pm and is filed under Uncategorized. You can follow any responses to this entry through the RSS 2.0 feed. You can leave a response, or trackback from your own site.