Distance yourself from negative things and have a better day…

“Everything is going to be alright, maybe not today, but eventually, because beautiful things happen in life when you distance yourself from all the negative things.”  (Unknown)

As we start a new week, we once again have choices to make which will impact how we view things, react to things or let things affect us. We are constantly bombarded by negative 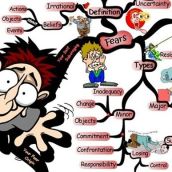 things in the news, since the news media thinks we want to see and hear about the misfortunes of others, or at least the sensational bad things that happen in the world around us. In our daily lives both good and bad things happen all around us and we choose which we will focus upon. We encounter people as we go through the day and we can choose to greet them with suspicion and cynicism or with a smile and an open mind.

We can’t really be like the cartoon characters who loudly yell “La, La, La”, in an attempt to ignore or not hear the bad things in life; however, we don’t have to focus upon them or feel obligate to react to them or let them drag us down. Some people might misinterpret your lack of negative response as being uncaring; but just the opposite is true – you care; but, you just refuse to let it overwhelm you and change your approach to life and towards others. In fact, you care enough to remain upbeat and positive to help others out of their funk.

ion of this approach
to life. The sometimes stoic British ability to remain calm in the face of great danger or threat, especially during World War II, was what Winston Churchill tapped into in his famous speech that exhorted his people to “never give up.”

In our daily lives it is important to pause when negative or bad things happen before reacting to them. I’ve written here in the past about being able to say, “So what” to those things; to be able to put them into perspective and realize that most will not have the dramatic and dreaded impacts on our lives that we might initially think. After all, if you’re still there to think about them; and well, you’re still there. It didn’t kill you and that a good start and a positive thing.

So, instead of spending any more time dwelling on that past incident, take the advice of today’s little quote and distance yourself from that and all negative things. Focus instead on finding the beautiful things that are also happening in your life. Meet someone new and perhaps make a new friend. Try something new and perhaps discover a new passion. Look for the rainbows in life and not the dark clouds