“There aren’t many people that you just ‘click’ with, and when you find those people, you don’t just let them go.”  (Unknown), as seen recently on the Jack’s Winning Words blog.

Today’s thought concerns those that we meeting in life who we just immediately like and want to spend time with. These people may end up being our BFF’s. We enjoy

them and, if we’ve really “clicked”, they like us, too. For women these may be the few that you share everything with, your hopes and dreams, your fears and concerns and your crushes and loves. For guys, the relationship may seem a bit less open and may involve a bit of drinking before anything is shared, but these are the few with whom you could watch the movie Brian’s Song together and both cry at the end.

The concept of “clicking’ usually has a lot to do with finding someone with values and beliefs that are in sync with yours, which you will discover over time. Many times the initial attraction of this new friend will be fairly superficial – mannerisms, how they

speak or how they conduct themselves in public. As you get to know them better, you may start to see a lot of yourself in them or them in you. That may be the real “click” here; the fact that you and they are so alike. It’s sort of like hugging yourself and we all seem to find satisfaction in confirming our own beliefs and values.

The old saw about opposites attracting may also come into play here; although I have my doubts about the strength or longevity of such a friendship. Occasionally I’ve seen people who hung out with other people who seemed to be their complete opposites. Usually one of the two was either brash and loud or maybe just

proudly and defiantly different; while the other was the image of the prim or proper person who would never appear like their friend or do what they do. I’ve never been able to figure out whether those were symbiotic relationships in which both gained something, somehow; or whether they were just instances of lives someone (or both) trying to live vicariously through someone else. Somehow they’ve clicked.

There’s an old saying “it was love at first sight”, and certainly today’s little saying would apply there, too. Most often the initial “click” that you might have with someone of the opposite sex is physical and based almost solely on appearances. That is usually short lived and if there is nothing below that initial surface reaction to like the click can quickly turn into a clank. Did you ever see someone that you thought, “Wow, I’d like to meet them” and when you do and they open their mouth and speak you immediately try to find the quickest way out? The old saying might be better phrased as “it was lust at first sight” in those cases. 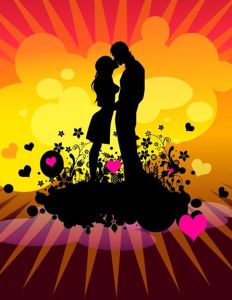 suddenly snaps into sharp view when they say something that you know that you can relate to or identify with. Sometimes those insights are the first real sight that you have of them and you may find that you love it and them.  Women seem to develop the ability to look passed the physical in order to find the true beauty of the person inside; while men, especially younger men, often have great difficulty looking at anything other than the physical. It is then very fortunate that women also develop patience and tolerance for the younger men that they meet, undoubtedly in the hope that they will eventually mature and catch up. Some do. Hold on to those that do.

Inspiration | Tagged: clicking with someone, liking someone |