The line, “Can we talk?” used to be one of Jon Rivers favorites. Joan used it to introduce

numerous topics in her act. Today’s little saying; which, of course, I saw on the Jack’s Winning Words blog recently, is sort of God’s version of, “Can we Talk?”.

“When you cannot sleep at night, have you ever thought maybe it’s God saying, ‘We need to talk, and now you have the time?’”  (Pinterest) 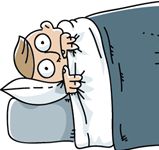 confrontational. I’ve written here a few times about letting go of the intractable problems of life or the fears that we conjure up about events that we have no ability to change. Our minds are fantastic at imagining all of the worst possible scenarios, which we then feel obligated to try to solve or come up with plans to deal with them. It usually turns out that none of our imagined disasters really occur and everything works out in the end.

How wonderful it would it be if we could avoid all of the sleepless nights of worry – and we can. Since you may not be listening to God asking you if you need to talk, maybe you should take the Joan Rivers approach and ask Him- Can we talk? I think you’ll be surprised at the immediate lift in your spirits that will result from just taking that step. Just starting out by admitting that you haven’t got this and that you need His help will lift the weight of

feeling that you have sole responsibility from you. Then, ask for courage, guidance and strength in dealing with the issue, rather than hoping for some miracle that makes the whole problem just go away. That will get you thinking straight again.

With God on your team, I think you will find the courage to face the problem and He will help you see the right thing to do and give you the strength to carry out the plan that He has helped you formulate. There is a passage in the Bible; “If God is with us, who can be against us?” – Romans 8:31. Don’t be surprised if a sudden calm comes over you, too. That is a good side-effect of talking with God.

I have posted a few times about my favorite approach to vexing issues, which is to off-load them to God by letting go and saying, “Not my will, but thy will be done.” The relief that

comes from letting go of the sense of failure or the fears that accompany particularly thorny problems not only allows me to get to sleep, but usually results in awakening without the fear of facing the problem head on. After all, if God is with me; how bad can any earthly problem really be?

So, the next time you are facing something that is keeping you awake at night; maybe it’s time to look up and say, “Can we talk?” God is on duty 24-7, so he’ll be there to listen and help, and the call is free.

Inspiration | Tagged: #inspiration, God's will be done, talk with God |