“The wolf will lie down with the lamb…and a little child shall lead them.”  (Isaiah 11:6)

That was the quote used in today’s post to the Jack’s Winning Words blog. Jack used it to write about what he sees as a turning point in the movement against gun violence. He compared the recent Walkout Day, led by survivors of the recent Parkland school shootings, to the Children’s March during the civil rights movement.

I’m a participant in the Huron Valley Coalition, which is an effort to save children from becoming victims of substance abuse, mainly through educational programs for them and the community. Recently the Coalition sponsored a student round table discussion about gun violence in schools, as a means of understanding the student’s perspective on this issue. This program just happened to fall on “Walk Out” day, so that became a part of the conversation. 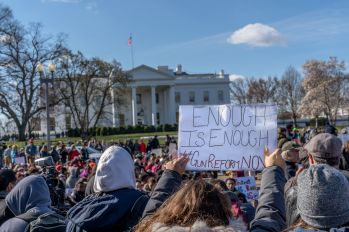 ted elsewhere across the country, there was a lot of confusion and very mixed support for the Walk Out within the administrations of the various schools, even within our local school district. Some teachers and administrators supported the Walk Out, while others warned students not to participate for fear of consequences later. In general, the students who spoke at this round table were disappointed in the lack of a consistent message from the adults involved and vowed to do a better job themselves next time (and they were clear that there will be a next time).

I was a bit surprised by the reported politicization of the issue within the student body. I guess I don’t recall from the ancient days of my own high school experience that students identified that much with the various political parties or their platforms. That is apparently not the case these days, as the roundtable discussion exposed the political opposition to the Walk Out within the student bodies of the various schools. Apparently, even within high school students there are strong attachments to one political point of view or the other. Political polarization starts young these days.

Even with those differences of political opinion, there seemed to be a universal feeling

that this has to stop, that schools need to be a safe place of learning and not a place where “shelter in place” and “active shooter” exercises are the norm. I hope that the children will continue to make noise, continue to walk out and protest the mess that the cowardly politicians in Washington cannot seem to take fix. There is no place in the woods for a hunter to use an assault weapon and there should be no place in our nation’s classrooms for them either. Had they foreseen the future, I’m sure our nation’s founders would not have included in the Constitution that every citizen has the right to bear a machine gun or assault rifle.

So, follow the children. They are trying to clean up the mess that we adults have made of the country. Maybe as they get old enough to vote they will remember who in Washington stood with them and who stood with the other side. Then instead of walking out, they can walk into the voting booth and really make changes in Washington. Let’s hope so.

This entry was posted on Tuesday, March 20th, 2018 at 12:02 pm and is filed under Inspiration. You can follow any responses to this entry through the RSS 2.0 feed. You can leave a response, or trackback from your own site.