Choose to be kind this week…

“Choose to be kind over being right every time.”  (Richard Carlson)

From a recent post to the Jack’s Winning Words blog. Jack went on to write about the Mr. Know-it-all syndrome that some people exhibit. Unfortunately, that hits too close to home for me, as my wife often calls me out on.  I really have to work on not jumping in to

correct some factual error (at least in my opinion) that I think may have just been made in something that is said. Sometimes (probably most of the time) it is better to just let things go, even if you know that what was just said is not correct. Be kind this week.

One way to look at things is to just say to yourself that what was just said is what the person who said it believes and messing around with beliefs is usually a losing cause. Perhaps it was their opinion about something; and everyone is entitled to their own opinion. It is surely a mistake to jump in with a correction on anything that may be political or religious, since those are two areas that are very personal and difficult to argue. Just say to yourself, “I don’t agree with your opinion or

view on things, but that’s OK.” Don’t say that out loud, unless you are just spoiling for an argument. Be kind this week.

Rather than trying to assert the “right” (from your perspective) opinion into the conversation, be kind and try to understand the other person’s point of view or at least honor his/her right to that opinion. One can be kind without being condescending and one can be kind without surrendering their own position or opinion. Be kind this week.

Another good trait to develop is being able to admit when you were, in fact, wrong on some opinion or “fact” that you held a strong belief about. Sometimes additional information or event prove the position that you held to be wrong and rather than cling

stubbornly to a disproved position, it is much better to admit your mistake and move on by embracing the new “truth” of the matter. Perhaps now you will be better able to understand the position that others held all along, which you considered “wrong-headed” until now. You will probably also realize that, had you chosen to be kind rather than right in your position, you would now be in a much better position. Be kind this week.

So, choose to greet others ready to accept and understand, rather than ready to correct. Try to understand things from their perspective rather than forcing them to see it from 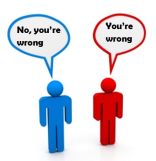 yours.  Maybe there is no right and wrong, just two wrongs that will get you nowhere. Life does not have to become as dysfunctional as our current political system, where everything is judged using a far-right or far-left litmus test. There is a win-win middle ground were different opinions and perspectives may be valued for providing diversity to the conversation and where the truth is somewhere in the middle or, perhaps, somewhere else altogether. Be kind this week.

When you hear someone say something that you would normally try to correct; rather than blurt out, “You’re wrong”, try “How interesting of you to say that”, or perhaps reply, “I hadn’t thought of that view of things.” You may be pleasantly surprised at the conversations that follow. Be kind this week.

This entry was posted on Monday, March 5th, 2018 at 1:03 pm and is filed under Inspiration, Pure fun. You can follow any responses to this entry through the RSS 2.0 feed. You can leave a response, or trackback from your own site.