In a recent post to his blog, Jack’s Winning Words, retired pastor Jack Freed shared this tidbit of wisdom from and unexpected source – “A wound gets worse when it’s treated with neglect.”  (Stevie Nicks).

It may be opined that Nicks was not talking about physical wounds, but rather those wounds to our ego that are inflicted upon us by others through actions or words, or perhaps wounds that are self-inflicted. The same can be said about the wounds that we may inflict upon others, either intentional or inadvertent.  Sometimes the wounds come from perceived slights (real or

imagined) rather than from overt actions or words. In any case the advice that Nicks give is not to let those wounds fester, not to neglect them; rather you should deal with them.

If you read the advice columns in the papers, you will notice that many of the letters to the columnists deal with these types of wounds. They are filled with laments that “she said this about me” or “he did that to me” and sometimes just “I was left out of the family event”. Those are all wounds that need attention and writing to the advice columnist is one way to give them some attention. Perhaps the better way it to learn how to deal with your wounds yourself.

A good start is by understanding the old phrase, “perception is reality”. The person or people making the hurtful (to you anyway) comments that wound your ego have somehow come to the perception that they represent the truth (reality) about you. You

must accept that, for them anyway, this is reality as far as you are concerned. If you begin by stopping to analyze what that reality is in their eyes, you might discover the grain of truth that is at the core of their perception of you. Maybe they say, “I don’t like being around him/her, because he/she is always in a bad (down) mood and I don’t want him/her to bring mine down, too.” Wow, you are perceived as Debbie Downer, the moody person who isn’t much fun to be around. How did that happen?

Maybe, whenever anyone greets you and asks how you are, you go into some long, dreary story about how bad your life is. Perhaps you are overtly seeking sympathy, or maybe you just don’t realize how a negative response to what is meant as a cheerful opening en joiner; whatever the reason, stop and think before exposing your wounds to

others, in hopes that they will empathize with you. Once the initial pleasantries are exchanged, you may be able to judge whether this person has enough interest in you or is a close enough friend to share a wound or two and to seek advice from. The BFF’s in your life may be the only ones that you meet to whom you should ever expose your wounds. Do that too often with them and even BFFs will start to avoid you.

Understanding the perceptions that you give people does not really treat your wounds, but it may help prevent even more wounds from people who are turned off by your behavior or demeanor. So, maybe rule number one should be, “Don’t wear your wounds on your sleeve for everyone to see”

Rule number two might be, “Do something about it – treat your wounds.” Wounds to your ego are like zits on the face of a teenager. They may make you self-conscious, they may shake your self-confidence, or they may just make you frustrated and mad. If carried in silence they can lead you into dark places where others will avoid going. 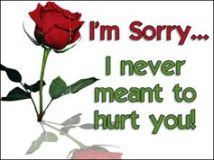 ted here before about dealing with problems and putting them behind you. That is the best way to handle your wounds, too. First, acknowledge that something that you did or that someone else did is bothering you – it is an open wound. Then determine if there is anything that you or anyone else might do that would correct, mitigate or make right what has happened or what was said. If it was you who said something that hurt someone else, and now that thoughtless action has bounced back to wound you; then you know who can fix that. Apologizing and saying that you are sorry to the person impacted by your actions will have a salving effect on them and on you. You may cure two wounds at once.

If someone else has offended you somehow, causing a wound that you wish to heal, the most honest approach is to confront them directly and explain how what they said or did made you feel; how it wounded you. Unless you have been attacked by a malevolent person who is out to do you harm for some reason, most of the time you will find that the other person didn’t mean to cause you any harm or pain – the slight or comment was inadvertent or perhaps totally misunderstood. It helps to start out by giving the other party the benefit of the doubt that the incident was really meant to wound you.

If, somehow, the wound that you are feeling was self-inflicted, caused by some action

that you took that you now regret; you need to give yourself some slack and try to turn this into a learning experience. Beating yourself up is never the best way to deal with a failure or a mistake. Stop an analyze what your thought process was going into the event and which of the assumptions that you might have made, or which “facts” that you were relying on, might have been wrong and steered you in the wrong direction. Learn from it.

Rule three is perhaps the hardest, but most important – forgive and move on. You can’t really move on with life carrying around a bunch of open wounds. You need to forgive the other person or yourself for what happened, acknowledge that it is in the past, and 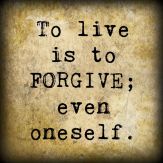 move on. Even the gravest of perceived slights or actions by someone else against you must be forgiven and you certainly must be able to forgive yourself, if you are to get out of self-pity mode and get back to living.

Examples of people forgiving the most egregious offenses that I have ever seen have been featured on TV News. The survivors of the horrendous church shootings in South Caroline have forgiven the shooter. There have been other reports of similar acts of forgiveness for other horrendous crimes or actions. If you watch those reports, you will notice a sense of peace that those people have achieved by being able to forgive the other person. Certainly they will carry memories of those events for the rest of their lives; but they will not carry wounds – they have forgiven and moved on.

perpetrators are about people with a strong foundation of belief in God in their lives. As part of their healing process, they have taken their wounds to God and He has healed them. They are able to say “I forgive you” to the person how harmed them because they are secure in the belief that God has forgiven them all of their sins, no matter how small or large.

I like the way Lewis B. Smedes put it – “Forgiving does not erase the bitter past. A healed memory is not a deleted memory. Instead, forgiving what we cannot forget creates a new way to remember. We change the memory of our past into a hope for our future.”

So, forgive and turn away from the past; and look to your future with hope. You have healed your wounds.

This entry was posted on Thursday, May 18th, 2017 at 3:25 pm and is filed under faith, Inspiration. You can follow any responses to this entry through the RSS 2.0 feed. You can leave a response, or trackback from your own site.