“What’s important is to keep learning, to enjoy challenge, and to tolerate ambiguity.  In the end there are no certain answers.”  (Martina Horner) – as seen in a recent post to the Jack’s Winning Ways blog. Jack went on to write – Neuroscientists say that the brain does not like ambiguity… People, in general, want “yes or no” answers.  No equivocation.  But life’s not like that.

In my real estate world there many cases where the answer to a question starts with “it depends…” Lawyers tend to answer questions like that, too, because they know that so much in the law is open to interpretation. Much what has been said lately by #POTUS, #Tweeter-in-Chief seems initially to be straightforward, until one starts to think about how the simplistic answers that fit into 140 characters will actually be implemented. The devil is in the ambiguity of the details.

One consequence of the brain not liking ambiguity is that we waste a lot of time trying to solve problems for which there are no real, unambiguous answers. It is possible to answer a child’s question, ‘Why is the sky blue?” with an unambiguous and scientifically verifiable answer. But let that same child ask, “What is love?” and see if you can come up with a complete answer to that. We also tend to wrestle with things that we pose to ourselves as questions, when in fact they are conundrums with ambiguous answers.

A very important word in today’s quote is “tolerate”. It is saying that while we are not

giving in to ambiguity, we have come to the conclusion that we will not let it ruin our lives, that we will acknowledge it and choose to live with the fact that some things are unresolved and unresolvable.  The catch phrase “it is what it is”, was probably invented by someone who had just accepted some ambiguity in their life.

Once you accept that there are no certain answers to some things, you can let go of them and focus instead on the things that you are sure of or the things in your life that can be solved or resolved. You can spend more time focused upon those who love you and accept your and less time trying to figure out why some people reject you or hate you (or so you think).

At the end of today’s quote is also an important little phrase – “In the end there are no certain answers.” I made the point earlier that certain things were scientifically provable and thus not ambiguities; but are they? A huge majority of the world’s best scientists have signed on in support of the theories surrounding man’s impact as the primary cause of Global Warming, yet our #Tweeter-in-Chief and his appointee to the critical post of EPA Chief don’t believe the evidence that these scientists have collected and the case that they make. So, in the end, there are no certain answers in the minds of those men.

Perhaps Anton Chekhov was right when he said – “Man is what he believes.” 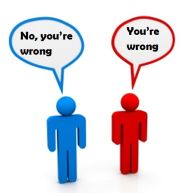 Since we live in a world that surrounds us with many ambiguous situations and we are now under a leadership that now supplies us with “alternative facts” to almost any situation, I suppose Chekhov’s insight is now more important than ever – we are what we believe. Perhaps #POTUS has discovered a new way to deal with ambiguity – just believe something and it becomes true, it becomes an alternative fact upon which we can build the rest of our lives.

I still have trouble with that concept, perhaps because I bring some beliefs about right and wrong into the mix along with some historical perspective of the facts. I struggle to understand that way of thinking, the same way that Chuck Todd (#chucktodd) did in his TV interview with Kellyanne Conway, when she introduced the term “alternative facts” in response to a question about something that the White House Press Secretary had said. Todd was nonplussed by that term and how to differentiate an “alternative fact’ from a lie. Maybe Chuck and I just don’t see the ambiguity that is hidden in the term

“fact”. Obviously, for some, it is not a fact if you don’t believe it is a fact; and, even less so if you choose to believe an “alternative fact”.

So maybe we don’t have to worry about accepting ambiguity, but just get used to tolerating alternative facts for the next four years. I for one am having a hard time with that. How about you?

This entry was posted on Monday, January 30th, 2017 at 1:47 pm and is filed under Inspiration, politics. You can follow any responses to this entry through the RSS 2.0 feed. You can leave a response, or trackback from your own site.