Attention is a two way street…

From the Jack’s Winning Words blog – “You learn something every day if you pay attention.” (Ray LeBlond) A study by Microsoft (Op Ed in the NYT) shows that the average attention span is 8 seconds, down from 12 in 2000. It’s now shorter than that of a goldfish. Perhaps that’s the reason for the flash-ads. It’s a fast-paced world out there, like it or not. Messages continually bombard us…a look, a word inserted in a sentence, something not said. Today, be alert for the 8 second message. 😉 Jack

Unless you read really fast, that 8-second attention span would have gotten you through about four sentences in Jack’s post above. No wonder Twitter is so popular; it’s messages match our attention spans. In business we used to create and practice what we called our 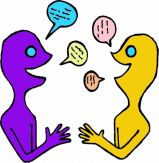 elevator pitch. That was a short message that could be delivered in the span of time that someone might spend with you on an elevator while going to work. Usually these were timed to be delivered in 15-20 seconds (maybe a little longer for a skyscraper elevator ride), and they were supposed to contain enough content to quickly get across compelling information about yourself or your product so as to elicit the response of the other party being interested enough to what to know more. It was an interesting challenge.

great bloggers, but lousy Tweeters. It would have been frustrating for them to try to squeeze their great ideas and arguments into a Tweet; however, I also suspect that they would have found a way to use and adopt the technology, as did those in most of the recent areas of citizen unrest and uprisings. Perhaps Paul Revere’s ride to Lexington would have been unnecessary if he could have just been able to Tweet that the British were coming by land.

But, I digress; knowing that those of you with short attention spans stopped reading two paragraphs ago. Fort those still reading, I might add to LeBlond’s little saying that you have to do more than just pay attention; you have to do something with what you have heard or seen. You need to figure out what it means and assimilate it into your current knowledge store. Not everything is actionable, nor does it need to be; however, anything that you take the time to pay attention to should at least be something that you learn from or which reinforces knowledge that you may already have.

There is another little saying that I’ve had lying around for some time, just waiting for the opportune time to use it. It seems somehow appropriate for this post :
“If you want me to be a good listener, give me something good to listen to.” (Unknown)

much of it has become meaningless and not worthy of attention. That too may be laid at the doorstep of modern social media, where the location of a person or what they had for breakfast passes for “content”.

So, pay attention and be a good listener to day and maybe you’ll learn something; but, also be attentive to what you contribute and make it something that someone else will find worthy of listening to and from which that too will learn. Be interested in others and be interesting for others to meet. Attention is a two way street. Have a great week ahead!

This entry was posted on Monday, January 25th, 2016 at 4:34 pm and is filed under Inspiration, Pure fun. You can follow any responses to this entry through the RSS 2.0 feed. You can leave a response, or trackback from your own site.