Is walkability important to you?

How walkable is the area that you live in? Is walkability important to you in your choice of a new home? How do you find out how walkable a location is? I can’t answer the middle question, but I can help you find the answer to the first and last questions. There is a great site now owned by Redfin – https://www.redfin.com/how-walk-score-works – that rates neighborhoods all across the country. If you go there you can put in an address – either where you live now or where you are thinking about moving to – and find out its Walkscore.

The Walkscore web site gives grades on a scale of 1 to 100 for the walkability of the area surrounding the address that you provide. The site looks at a lot of different factors, but it all boils down to evaluating what you can walk to within a reasonable distance. Things that the site looks for are stores, restaurants, libraries or other cultural venues within walking distance and what that walk might involve. The Walkscore will be higher is there are sidewalks and a good layout, such as the grid structure that is found in most large cities vs. the lack of sidewalks and  winding streets with lots of cul de sacs that are found in  most modern subdivisions. You can go to the Walkscore site for a more complete explanation of the factors that they evaluate to come up with a Walkscore for any given area.

In the past (through the 1950’s at east) most cities and towns were laid out in grid patterns and had sidewalks. The advent of the suburban subdivision in the 1950’s changed all of that.  Many of the early subs still had sidewalks, but those eventually went away, too. People moved further out and became much more dependent upon getting into their cars and riving to get to anything. Subdivisions quickly evolved from any sibilance of a grid structure into free flowing curves and cul de sacs. The term “bedroom communities” was coined to refer to these developments where the only thing that one could do there was sleep; anything else meant getting into the car.

There are still great walkable cities like New York, Boston or Chicago available; where 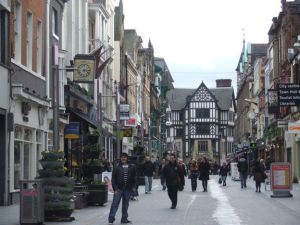 living quarters are interspersed with businesses, stores and amenities and where one can still walk to a great many things. Newer cities tended to be built mainly for business and seem to empty out at night, leaving little to walk to for those who might live there. It’s actually kind of eerie at night or on weekend in many of those cities – like being in a ghost town.

So, why is all of this of any importance? I suppose one could start by pointing out the obvious health benefits of getting out and walking to things; but there is also an environmental benefit – you’re not driving and creating pollution or using up fuel. There is also usually a social a side benefit. When you are out walking you will likely encounter others in the neighborhood doing the same and, because you are walking, it is easier to stop and say “hi” to them and maybe even have a conversation. Try that while driving your car.

You may be much more likely to make use of local libraries, museums or other cultural amenities if it’s a short walk, rather than a drive, to get to them. Walkable areas usually also have lots of neat little restaurants and locally owned shops. You may find that you don’t have to jump in the car and drive to the mall to get what you need. A side benefit is mostly psychological –  you don’t feel trapped in walkable areas, because you know that, even if you’re without a car, you can just walk to most things if you want to. 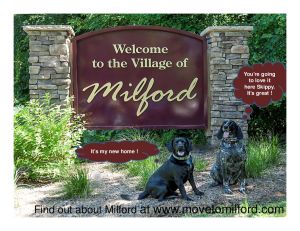 I moved from one of those “bedroom communities” in the suburbs that had a Walkscore of 15 into Milford, Michigan, a small village where I’m just 2 blocks from downtown; and I see a Walkscore of 62 when I check it. I can literally walk to most that I need, with a few exceptions where I would have to get in the car and go to a mall or superstore. It’s great and we love it. Plugging in downtown addresses in neighborhoods in Boston, New York or Chicago might turn up Walkscores that are

much higher than that. Try it and see what the Walkscore is for your current home’s location.

So, if you’re in the market for a new home, how important is the walkability of an area to you? If you have 3-4 areas that you are considering for a new home location, plug them in to the Walkscore.com site and see what their Walkscores come out to be. You don’t necessarily have to move back into an urban setting to get into a walkable, but it is more likely that small towns offer more walkable environments than most suburban subdivisions. If you happen to be looking in Southeastern Michigan, call me and I’ll help you find a great walkable area to live in.

This entry was posted on Thursday, February 26th, 2015 at 3:35 pm and is filed under About Milford Michigan, Pure fun, Real Estate. You can follow any responses to this entry through the RSS 2.0 feed. You can leave a response, or trackback from your own site.