“To live a creative life, we must lose our fear of being wrong.” – Anonymous

I saw that little quote somewhere recently and though it worthy of comment. I’m not sure that I agree that there is a right or wrong to creativity or to living a creative life. To my way of thinking, there are better ways to express the idea that I assume the author of that saying was try to get at. One might be “to live a creative life, we lust lose our fear of

being laughed at” or maybe “to live a creative life, we must lose our fear of being judged.”

My point is that the fear that others will not understand or accept our creative efforts is what holds many people back. Personally, I find no meaning in many modern impressionist paintings; but that does not mean that the artist should be afraid to paint them. There are songs that I don’t get, poems that I cannot fathom, movies that I could watch several times and still not understand, but that doesn’t mean that they aren’t creative or that the people who produced them aren’t leading creative lives. Their creativity should not be judged by whether someone else gets their message. In fact, I have always found it amusing that the so-called critics can stand around discussing what the artist was trying to convey in a work, when they have no idea what that artists motivation and thought process was at the time that the work was created.

There also seems to be some confusion in the world about the difference between creativity and technique. The worlds most accomplished pianist might bring wonderful technique to the playing of a piece by Mozart; however, it was only Mozart who represented creativity in that work. The pianist is representing technique and skills honed over long hours of practice and that is to be admired, but kept separate from the original creativity. In art, once one moves beyond the impressionists and into the abstractionists the line between creativity and technique becomes blurred. Was it creativity or technique to stand back 10 feet and throw blobs of paint at a canvas on the floor? I guess a bit of both. But, who am I to judge? I’m certainly not an art critic.

In non-fiction writing there is always the chance (almost the certainty) that someone will disagree with your approach, your “facts, your conclusions or just with the fact that you wrote about something in the first place. Writers almost always take some point of view in their works and there are inevitably those with the opposite view of things. So we must not live in fear of someone else disagreeing with us or challenging our work. Sometimes I get emails or messages, some rather blunt, disagreeing with what I’ve written. My response is normally – OK, that’s your point of view. What else is there to do?

So, I will continue to live my little creative life, writing about whatever strikes my fancy each day and unafraid of being judged or being wrong. How can I be wrong, if I write, “this is how I feel about that?” Now I will admit that I wander off 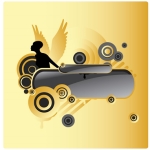 into the world of giving advice on some topics from time to time; however, the reader should feel free to ignore my advice and my opinions. I’m not wrong, just being creative.

And what of you? Do you write or paint or sculpt or make pottery or scrapbook. Whatever it is that you do that is creative; do it without fear of judgement by others. There is no right and wrong in creativity, there are just finished works and those in progress. Get on with it.

Have a great weekend!

This entry was posted on Saturday, September 20th, 2014 at 3:51 pm and is filed under Inspiration. You can follow any responses to this entry through the RSS 2.0 feed. You can leave a response, or trackback from your own site.